We Now Turn to Malaprops

Following in the awkward steps of Mondegreens and Spoonerisms, we meet Mrs. Malaprop, a character in Richard Sheridan’s play of 1775, The Rivals. That unfortunate woman had a strong tendency to use words that sounded quite similar to the words that were actually called for. For some more recent examples of malaprops, enjoy the following:

The magazine New Scientist claims an employee referred to a colleague as “a suppository (repository) of knowledge.”

In Huckleberry Finn, Aunt Sally declares, “I was most putrified (petrified) with astonishment.”

And Yogi Berra of the New York Yankees could always be counted on for a startling turn of phrase. Of another player he said, “He hits from both sides of the plate. He’s amphibious (ambidextrous).” 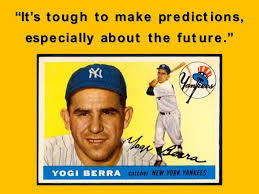 If a person has a nickname commonly associated with the given name, don’t use quotation marks around the nickname. For example, just write James (Jim) Cooper. But when the nickname is unexpected, use the quotes: James “Hotshot” Cooper.

Yogi Berra’s given name was Lorenzo Pietro, later anglicized to Lawrence Peter. At some point he acquired the nickname “Yogi,” but before long no one remembered the Lawrence Peter part and he became Yogi without the quotation marks.

Yogi, We’re Going to Miss You

Yogi Berra, New York Yankee catcher with a 19-year career, was (almost) as famous for his turns of phrase as was for his catching. Here are some of his most famous, listed in today’s Los Angeles Times:

• The future ain’t what it used to be.
• When you come to a fork in the road, take it.
• You can observe a lot by watching.
• Never answer an anonymous letter.
• We made too many wrong mistakes.
• It’s deja vu all over again.
• Baseball is 90% physical. The other half is mental.

And when Yogi’s home town, St. Louis, staged a “Yogi Berra Day” in 1949, Berra announced to the crowd, “I want to thank everybody for making this day necessary.”