My fear is that people will think I am ridiculing the Japanese by posting these signs. As a former teacher of English as a Second Language, I am well aware of how difficult it is to learn English. The irregular spelling alone is enough to discourage anyone. If anything, my reason for posting these signs is to (1) acknowledge that difficulty, (2) to show my own puzzlement by a culture that I love but whose nuances I largely do not understand, and (3) to marvel at anyone who learns to speak and write Japanese. Three different registers/styles of writing and speaking exist, depending on whom you are speaking or writing to. The characters number in the many, many thousands. Almost everything in the Japanese language leaves me “lost in translation.” My admiration for those who master it is enormous. That said, here are three more signs. 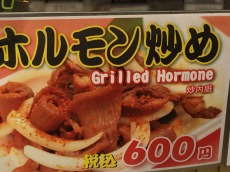 I took all these photos in Osaka, a city very different from any other I experienced in Japan. It’s known for food; the natives are reputed to eat out six times a week. The streets with restaurants and food stalls was mobbed.

The “NY Style Monster Pallet” sign flummoxed me for a minute. Then I remembered that R and L are sounds very difficult for Japanese to distinguish. Aha! It’s a parfait.

Quark is a store that sells real watches. As opposed to unreal watches? I suspect they are replicas of high-end brands.

And my favorite: Grilled Hormone. I was stymied. Is it estrogen? Testosterone? A thyroid factor? Look at the picture—it’s pieces of something. I’m thinking that something might be pieces of a gland that secretes a hormone. Your guess is as good as mine. Hungry?

A Quick Return to Japan

Here are two more Japanese signs I saw that made me ponder:

The only thing that goes through my head when I see this is a song. “Imagine you and me, so happy together….” Do you have any idea what the business might be? A dating site?

This is one of my favorites. When you see this store, you must think ONLY about a suit. NOTHING more. What if I dare to think about a necktie? Or a pair of shoes?