Do You Misplace Your Modifiers?

Misplaced modifiers happen when a word or group of words ends up modifying (giving information about) another word in the sentence. Often, the results are very funny.

I found this in one of my favorite magazines, The Week, which is a digest of articles from around the world. In an article on street food, with an accompanying recipe for Dan Dan Noodles (too complicated for me), Kate Jacoby and Rich Landau, chefs at a Philadelphia restaurant, V Street, declare, “We want the stuff that a little old lady is frying up in her flip-flops….”

Where to begin? First of all, how does the little old lady stand the heat? How does the food stay on her flip-flops? And do we really want to eat food cooked on a shoe and redolent of the odor of the foot that recently occupied that flip-flop?

You need to know that a modifier needs to be placed next to the word about which it gives information. Here’s an example:

“I met Harry only once before.” How many times did you meet Harry? “Only” once.

But here’s the problem: most people would write (and say), “I only met Harry once.” However, you didn’t “only” meet. You did meet. “Only” tells you how many times you met him: Once.

“Only” is the most commonly misplaced modifier. Others to watch out for are “hardly,” “even,” “scarcely,” “nearly,” “almost” and “just.”

Fix the modifiers in the following sentences:

My Favorite Book on English

Patricia O’Conner has done it again: she has updated and revised her classic book on writing and English usage, Woe Is I. I can hardly tell you how much I love this book. Before you stop reading, let me tell you that you will laugh out loud on just about every page. OK, read on. O’Conner realizes how all languages change over time, which is why she revised this classic book to fit with current and accepted usage. This is the fourth edition and, as English changes, there will be a fifth and a sixth and a twentieth.

PLURALS BEFORE SWINE  Blunders with Numbers

YOURS TRULY  The Possessive and the Possessed

COMMA SUTRA  The Joy of Punctuation

See? Not your typical book about English and writing. This one is Wonderful. Entertaining. Fun. Comprehensible. Helpful. Essential.

O’Conner also has a blog to which she posts almost every day, giving explanations about questions people (including me) have submitted. If you subscribe, you’ll get it in your inbox. It’s definitely not spam: www.grammarphobia.com

When to Capitalize Titles 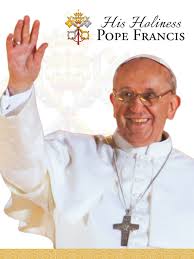 If the title comes immediately before or after a person’s name, capitalize it:

Pope Francis    but    The current pope is Francis 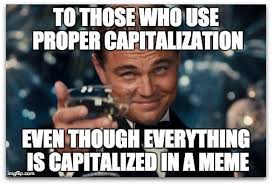 Whatever you do, DO NOT study Trump’s tweets for a lesson in capitalization. He seems to have zero idea of when to use capital letters and just does so at will, most often for emphasis. Of course, when you emphasize everything, you end up emphasizing nothing.

Here’s the deal: If you are writing the official name of something, capitalize it: